‘I want Inuit art in Cape Dorset to be known . . . for our future generation,’ artist 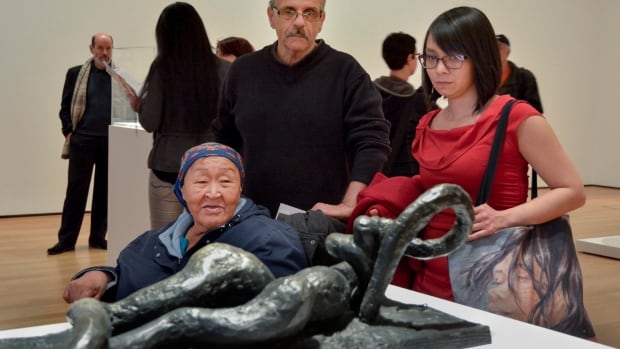 Two Nunavut artists took part in the first cross border public discussion on the legacy of the Cape Dorset print collection in New York City and had their prints added to the Brooklyn Museum’s collection.

Cape Dorset’s Papiara Tukiki and Iqaluit’s Saimaiyu Akesuk both with Kinngait Studios, spoke on a panel at the Brooklyn Museum about their work and the history and significance of printmaking in Cape Dorset.

“I wasn’t so ready for this,” said Akesuk about speaking at the Brooklyn Museum, “there’s so many people out there interested in our art.”

For Akesuk, known for her fanciful images of birds and bears, this was her first trip outside of Nunavut to promote her work.

“I want Inuit art in Cape Dorset to be known and for our future generation to know that there is a world out there.” 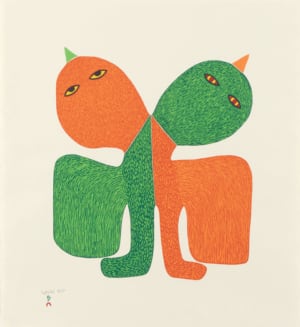 Saimaiyu Akesuk’s print Reflection is one of the Cape Dorset prints that will be added to the Brooklyn Museum of Art’s collection. (Dorset Fine Arts)

The panel was organized in partnership with Dorset Fine Arts in Toronto.

“People look at this work as so incredibly unique,” said William Huffman the marketing manager of Dorset Fine Arts in Toronto, who helped organize the talk.

“At the Brooklyn Museum, [prints from Cape Dorset] sit alongside all kinds of contemporary artists and their works,” adds Huffman.

Huffman says about 65 people attended the talks this month, a number he hopes will grow as the event becomes an annual happening.

The panel celebrated the 2015 international release of the 56th Cape Dorset Annual Print Collection on October 17. Since its emergence in the 1950s, the Kinngait Studios’ annual event has helped to promote Canadian Inuit art globally. 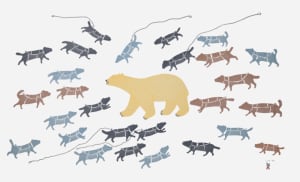 Polar Bear in Camp by Papiara Tukiki, is one of the two Cape Dorset prints added to the Brooklyn Museum of Art’s collection. (Dorset Fine Arts)

To mark its partnership with the Brooklyn Museum, Dorset Fine Arts gifted the museum with two prints by Saimaiyu Akesuk and Papiara Tukiki.