Kenojuak Centre campaign in Cape Dorset gets $4.5M from feds 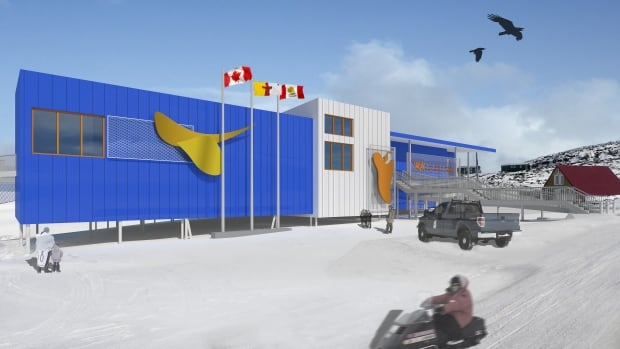 An artist’s rendition of the proposed Kenojuak Centre in Cape Dorset. A fundraising campaign is underway to build a new gallery and studio space in the Nunavut hamlet, home to some of Canada’s most famous Inuit artists. (submitted by Panaq Design)

Construction on the proposed Kenojuak Cultural Centre and Print Shop is scheduled to begin in the fall.

The facility will include a permanent and temporary exhibition galleries and space for Cape Dorset print artists.

Cape Dorset senior administrative officer Ed Devereaux said there’s more than 300 artists in a population of around 1,400, and a new facility will be welcome.

“It means that they are able to continue developing art for the world to appreciate,” he said.

“It is amazing some of the work that they do. And to have a facility to be able to do it in like this is basically going to make that legacy go on and on.”

The campaign to build an art and cultural centre is being led by the West Baffin Eskimo Co-op in Cape Dorset.

The Nunavut community has produced many world-renowned artists, including the late Kenojuak Ashevak, who produce their work using the co-op’s facilities.

The federal government had previously pledged $2 million in funding from Infrastructure Canada.

The centre is expected to cost more than $10 million. Devereaux said an additional $3 million is being privately fundraised.

“We still have some private funding that we are in the process of raising and I’m sure this will help us achieve that,” Devereaux said of the recent funding announcement.

The centre is scheduled to open by spring 2018.

“Our elders have been waiting a long time for this centre, and the whole community is very enthusiastic about seeing this project built,” reads a statement by Cape Dorset’s mayor Padlaya Qiatsuk.

“The centre will be a place for our people and visitors to hear our stories and learn more about our ancestors. And it will give our artists better spaces to create, develop their skills, and show our youth and future generations that they can find their own purpose and success in art.”